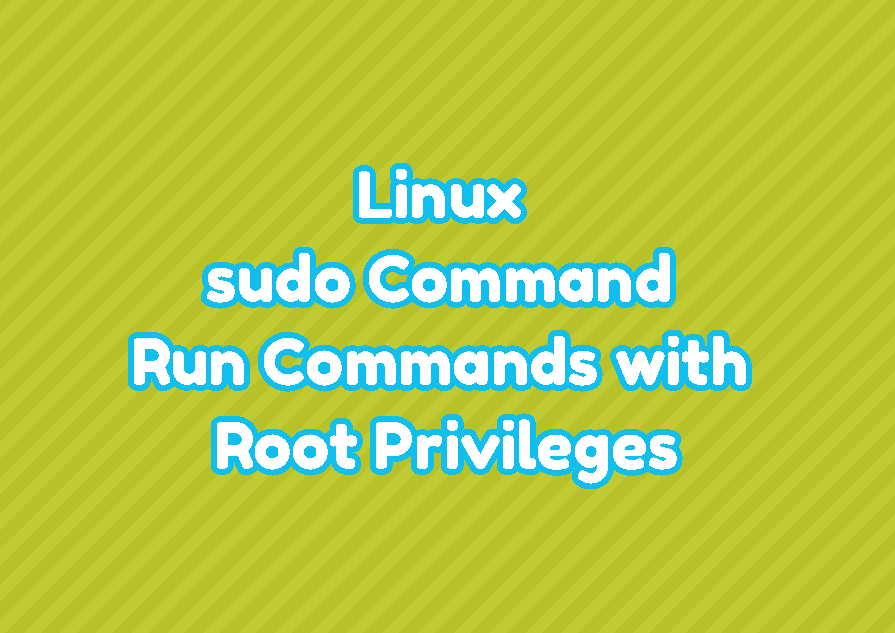 sudo command is a special command which is used to execute normal user commands with root privileges without logging as the root user. The sudo term is the short form of the “SuperUser Do” or “substitute user do“. This is not a security problem because in order to execute commands as root the user should have already provided the required privileges in the /etc/sudoers file. If not the user can not execute commands with root privileges. The sudo command also used to run commands with different user privileges. The sudo command provides the root or superuser privileges for only the current command or application. So this means sudo provides temporary administrative rights to the current normal user.

The sudo is create in 1980 but gained popularity in 1994 with the unofficial for called “CU sudo“. Then with extra development by fixing issues, problems and integration with more Linux distributions the name changed into “sudo“.

sudo command is used at the start of the command which means the root privielges are elevated before the execution of the command.

Even sudo command a lot of options or parameters the most popular options are like below.

The sudo command provides the -h option in order to list help information with available options. Alternatively the long format of the -h option which is –help can be also used to print help.

According to its syntax, the sudo command can be used to run different commands with the root privileges like below. In the following example, we will print the /etc/passwd content using the cat command. Normally the passwd file can be only read by the root user. The current user password will be asked for authentication. After successful authentication, the password will be cached and will not be asked for a short period.

The output is like below. Where every user in the system is listed with the information like loginshell, userid, home directory etc.

In the following configuration, we will enable the passwordless execution but restrict the commands the user can run. The user can only run the /bin/mkdir and /bin/rmdir commands. The commands should be provided with their full or absolute paths.

We can configure the sudo permissions for a specific Linux group. In the following example we will give the admin group the sudo privileges for all commands without password.

Even the sudo command is mainly used and popular for executing commands with root privileges it can be also used for to execute commands with different user privileges. The -u option is used to set the username as a parameter. In the following example we will execute the mkdir command with the user ali .

SUDO_ASKPASS is used to enable or disable asking password for the user.

SUDO_COMMAND is set the command executed by the sudo.

SUDO_EDITOR is the editor used to edit sudoers file which is nano in most of the cases.

SUDO_UID stores the user id of the user who invoked sudo command.

In this part, we will make some examples of popular use cases about the sudo command. In the following example, we will edit the index.html file with the www user privileges.

In the following example, the log files about the system will be displayed. Normally these log files are only viewed by the root and admin users.

We can edit another user’s home directory content like a file. In the following example, we will change the file which is owned and stored by the ahmet home user directory.

The system can be shutdown using the sudo command with a normal user like below.

If you want to change a different user password and do not want to log in to this user or root you can use the sudo to change another user password like below. In the following example, the user named elif password will be changed.

Multiple commands can be also executed with different user privileges like below.

Messed Up with Sudoers File