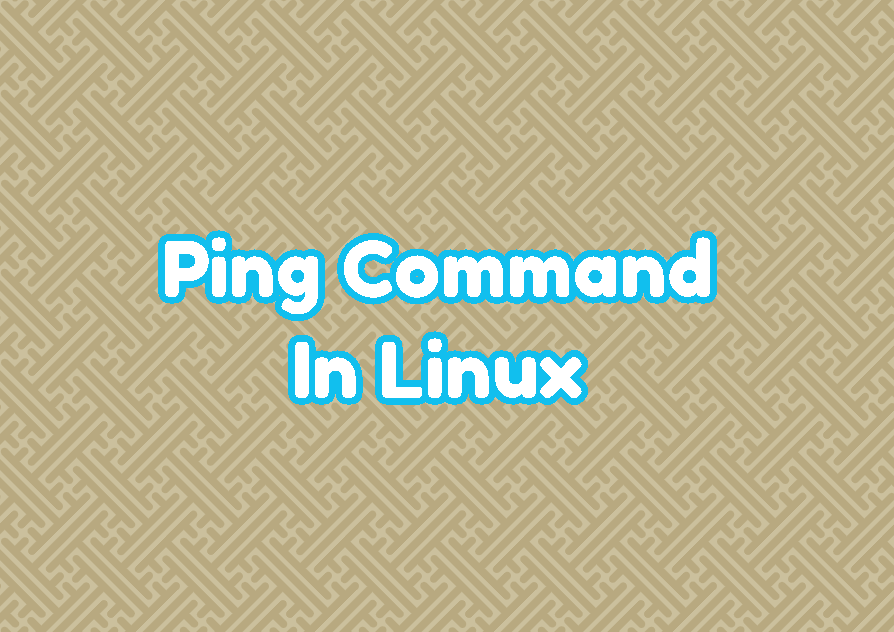 The ping command has very simple syntax where the option and target are specified like below.

The most popular and simplest usage is pinging the remote or target system. The target system can be provided with its IP address or domain name. In the following example, we will specify the domain name.

We can also ping an IP address like below.

At the end of the ping there will be some statistics about ping packets.

By default Linux, ping command sends an unlimited number of ping packets running forever. But alternatively, we can specify the number of the ping packets. The -c option and the number of the packets we want to send. In the following example, we will send only 3 packets to the remote system. With this option, there is no need to abort the ping command because it will stop after the packet count limit is reached.

Ping packets are sent in a sequential way with a time interval of 1 second. Every 1 second, a single ICMP packet will be sent to the target. We can change this ping interval by using the -i option and providing the interval value in seconds. In the following example, we will set the ping interval as 3 seconds.

The time intervals can be also set as milliseconds by providing a floating-point.

By default, the ping packet or ICMP packet contains a payload of 64 bytes. This packet or payload size can be changed with the -s option by providing the size in bytes. The payload data will be random data like sequential letters or numbers etc. In the following example, we will set the ping size as 128 bytes.

By default when a ping packet is sent to the target after 2 seconds the sender will stop waiting for a response and print this packet as unreachable. The timeout for the ping command can be specified with the -w option and provide the number of the timeout seconds.

TTL (Time To Live) is used to specify how many hops the packet can be routed. In every hop, the ICMP packet TTL is decreased 1 and when the TTL reaches 0 the packet is dropped. By default, Linux systems set TTL for packets as 128 but by using the -t option and the TTL count it can be changed easily. In the following example, we will set the TTL count as 32 for the ping command.

By default ping command use the IPv4 which is the most popular IP protocol version. But we can also use the ping command for IPv6 addresses. The -6 option is used to specify the IPv6.

The ping command provides very interesting features where when the ping is successful we can play sound or audio which is called an audible ping.