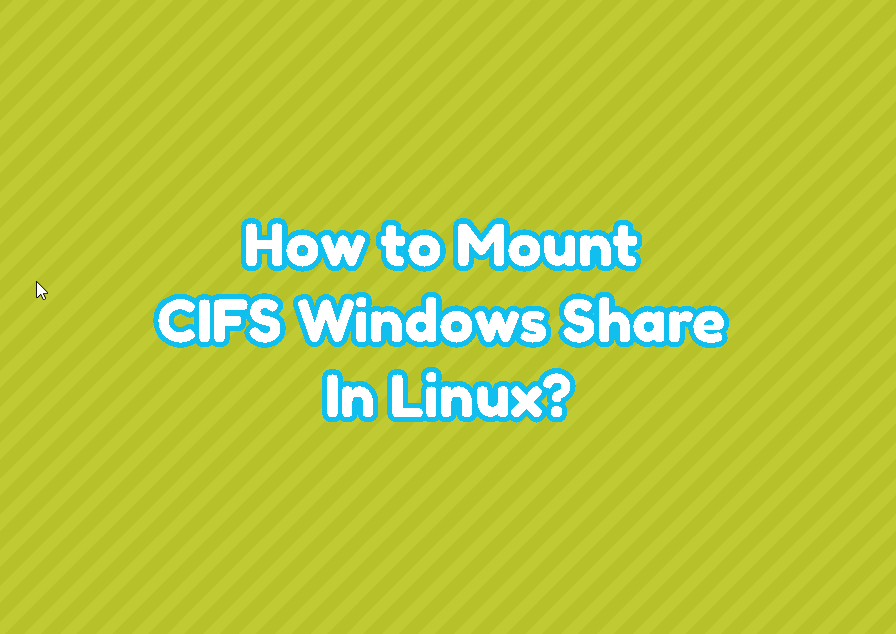 CIFS is a network-based file-sharing protocol which is used to share file, folders, and data over the network. The Windows, Linux, MacOSX, and other operating systems support the CIFS which makes it very useful to share files and folders over different operating systems. Both the SMB and CIFS protocols are developed by Microsoft and they work together without a problem. A Windows SMB share can be accessed with a CIFS client which is installed on a Linux system. In this tutorial, we will learn how to access and use SMB or CIFS Windows share from the Linux system.

Windows shares can be accessed by using credentials which are username and password. In order to mount a windows share the username can be specified by using the “-o username=” option. In this case, we use the username “ismail”. After running this command the password is prompted with the following line. While typing the password the characters are do not shown for security reasons. So just type and press Enter.

Alternatively the remove Windows share hostname can be specified as IP address. In the following example the share is located in 192.168.1.10.

After mounting a Windows share with the CIFS we can check the mount and list mounted paths in different ways. The most basic way is listing the local mount path by using the ls command.

Alternatively GUI based file managers can be used to list mounted local paths.

Windows share can be access with diffrent accounts and different authentication sources. Active Directory/Domain or WorkGroup can be used to specify user. The user domain or workgroup can be specified with the domain option like below.

The windows share access crendentials can be specified via the command line interface. But this is not so secure. The executed commands are stored in the history file or logged in to a file. The credentials can be easily grabbed by others. There is a more secure way where crendetials (username and password) are stored in a file. The credential file format is like below.

The windows share is mounted with the sudo command this makes the local share path can be read only by the current user. If we want to make the share available for all other Linux users we can use the access permissions option named dir_mode and file_mode.

Upto now we have used the mount command in order to mount a windows share with the CIFS. The mount command is generally used to mount files shares and file systems interactively via the command line interface. If we need to mount a windows share automatically when the Linux system starts and do not want to type commands the /etc/fstab can be used. The /etc/fstab configuration file stores mount information about the current Linux system which is applied during boot. We can also add network based shares to mount via CIFS.

Open the /etc/fstab file with your favouritte text editor with root privileges by using sudo command. In this case we use nano text editor. Alternatively you can be GUI based text editor like Kwrite.

Add the following line to the fstab file.

In some cases the share can allready used by other users. In this case it can not be unmounted to prevent data corruption. First the allready used files can be listed with the fuser command.

If you do not care for data corruption or other proeblems you can use the -l option which is used to lazy unmount for the windows share. This unmounts the file system when the usage is over.